We follow the English National Curriculum throughout, which means that the education our children receive is the same as if they were in a school in the UK.

We are not a bilingual school but children at the school receive instruction in both English and Spanish, meaning when they leave they are fluent in both languages. The children have all core lessons in English and also have lessons in Spanish Lengua y Literatura and Cultura Española allowing them to validate their studies with the Spanish system.

By choosing the British Education system you are not only arming your child with a language in an emerging international world, but you are also allowing them to develop their skills independently through different methods of teaching and learning. The British education system makes learning fun and individual, teaching children to be decisive and take control of their future. The British system instils a love of learning and strives for academic excellence. British qualifications are recognised all over the world both at universities and in commerce. The official examinations in the British system, include IGCSE and A-level.

The British System is divided into 3 main stages: Early Years and Foundation Stage, Primary and Secondary. The table above shows the year equivalences between the Spanish System and the British System.

We recognise that children develop at different speeds and in different ways, with individual needs and interests. We aim to recognise, encourage and support all children and have support available where needed for all children from those with dyslexia to those who are particularly able or gifted. 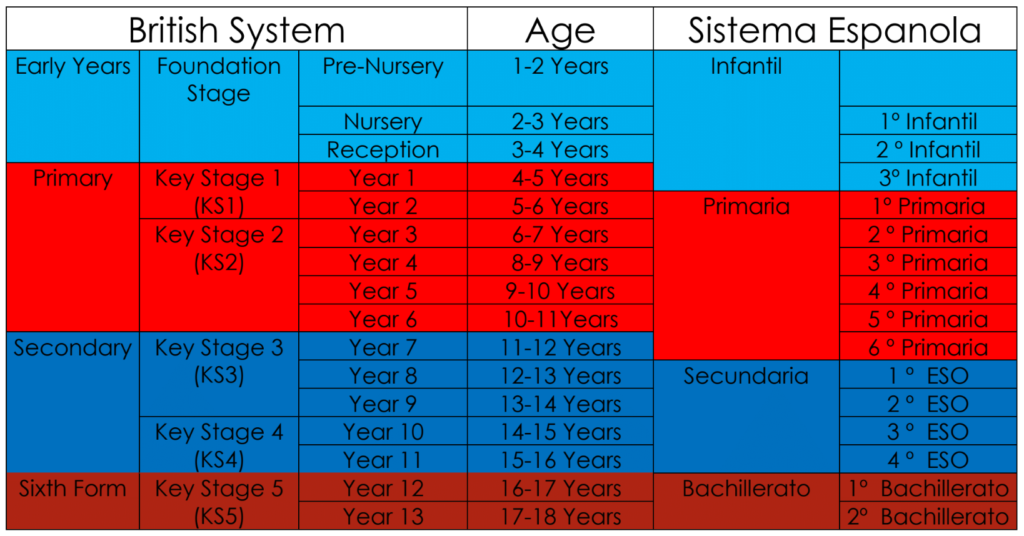 British qualifications are recognised all over the world both at universities and in commerce. The official examinations in the British system, include IGCSE (Age 15/16) and A-level (16/17).

At the age of 17 children, after completing Year 13, children will have to decide what comes next. Studying at Santo Ángel British School will give them a wider variety of options for their future. Children study Spanish as well as the National Curriculum subjects, they will have the option to apply to Spanish universities through the “Selectividad/EvAU exams” or apply for universities in the UK and rest of the world (A-LEVELS).

Will my child be abWhat happens if I move to a non - British school or different school?

What happens if I move to a non - British school or different school?

Your child must be accepted into a school, which corresponds to their age, year group or level. They can still attend or transfer to Spanish or other schools